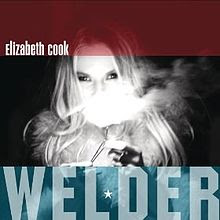 I recently downloaded some Thad Cockrell tunes on Noisetrade.
It highlighted Snapshot by Elizabeth Cook in the "you may also like " section so I downloaded that as well.

I was familiar with her work as I had her 2010 album Welder copied from the library.
So named because she is a qualified welder as is her father and also Her Heroin Addict Sister which is a song on the album.
As well as being a welder her father honed his skills on the upright bass in the prison band whilst serving time for running  moonshine.

And here is one not on Welder