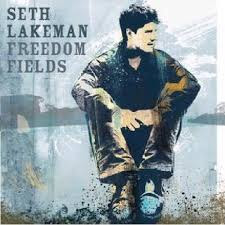 Yesterday familial drug addiction, today a mining disaster - well you didn't come here to be entertained do you?
We were up in St Andrews for a few days last week and I picked up some charity shop purchases including Dartmoor's Seth Lakeman's 2006 album Freedom Fields.

Described on the annoying sticker by the Mercury Prize Panel as - urgent,thrilling and haunting
Now I like folk music as much as the next man, probably even more but I'm afraid that it fails miserably on all three criteria for me - sorry Seth.

The Colliers  is based on the true story ofone of the worst British mining disasters of the 20th Century at Gresford Colliery.
Lady of the Sea is inspired by a Cornish shipwreck in 1780 at Silver Dollar Bay where people still dig for treasure.

Seth Lakeman - Lady of the Sea
Posted by Charity Chic at 08:00