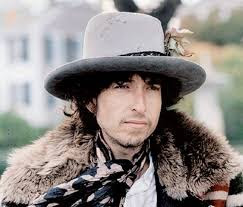 Welcome to my new Saturday Series - Namechecked
Before we get started a brief word about the also rans.
Dr George the Peanut Farmer's suggestion of charity purchases to be re-charitied has been discounted for reasons explained on my post on Monday
His other suggestion was to feature more of my brothers records. They will continue to pop up periodically
kevinpat's suggestion of travel songs was rather good and is one that  I will probably revisit

Let's start with a pretty obvious one
A Song for Bob Dylan features on the classic David Bowie album Hunky Dory
Here this Robert Zimmerman I wrote a song for you
Bowie is followed by Bob with a namecheck song of his own from Desire. Not a musician but a boxer in that it is a protest song about the miscarriage of justice which led to the jailing of Rubin "Hurricane" Carter"

Hopefully you get the picture - more next Saturday