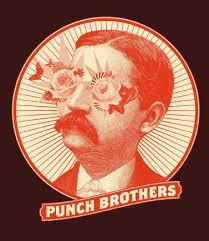 When I was looking for suggestions for a new series George the Peanut Farmer suggested charity shop records which should be re-charitied.
To date I have only done this on a rare occasion when the record/CD is truly awful.
At the moment I still have some space on the shelves but there may come a time when cull is required
An album which is unlikely to survive such a cull is Punch the 2008 debut by the Punch Brothers.

The first song Punch Bowl is a cracking bit of bluegrass, Thereafter  for me it goes down hill very rapidly with a form of classical and jazz based bluegrass/folk which is really not my cup of tea at all.
This includes a forty minute suite in four movements called The Blind Leading the Blind which I will spare you from.

More  bluegrass (of a non classical or jazzy variety) next Monday.

Punch Brothers - Nothing, Then