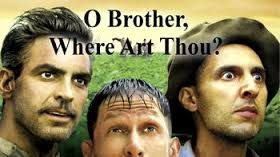 The Coen Brothers very rarely make a poor movie. However they succeeded with  2000's O Brother, Where Art Thou a story of three escaped convicts starring George Clooney, Tim Blake Nelson and John Turturro.
Fortunately the film spawned a terrific soundtrack produced by the mighty T-Bone Burnett.
Some excellent  modern recordings of country, blues, gospel and folk songs appropriate to the Great Depression period the film is set in
And of course some fantastic bluegrass which is why it is featuring today
The Whites consisting of sisters Sharon and Cheryl with father Buck pitch in with Keep on the Sunny Side.
Then we have The Soggy Bottom Boys featuring Dan Tyminski who overdubs Clooney's singing on the film

I think I can keep this Bluegrass lark up for a couple of more weeks. It has been pretty well received with only The Meat Purveyors failing to attract a reasonable number of hits

The Whites - Keep on the Sunny Side

Soggy Mountain Boys -I am a Man of Constant Sorrow
Posted by Charity Chic at 08:00