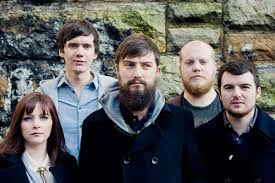 Kris Drever was as you would expect fantastic
There were purchases so look out for him featuring again.
Until then I will leave you with his cover of Allegory a song by Murray Attaway who was a member of a band called Guadalcanal Diary.

As an added bonus Louis Abbot of Admiral Fallow fame was part of the band. He was primarily on drums although at one stage he was drumming, playing keyboards and singing at the same time.Pretty impressive.
He has now lost the beard.
All of which is merely a preamble to me playing you another terrific cover