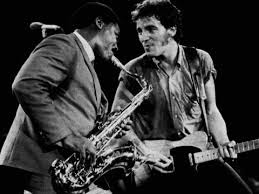 When I first thought of this series these lines from Grey Cortina from the seminal Tom Robinson Band album Power in the Darkness were among the first to spring into my head.
It says a lot about the longevity of the Boss that he was being sung about in the days that eight tracks were still on the go

Bruce is currently touring the UK with The River tour.Hope you enjoyed Manchester Swede
Only fitting then that we go all the way back to 1980 (two years after Power in the Darkness) and feature the song of the same name from the album of the same name.

Bruce Springsteen - The River
Posted by Charity Chic at 08:00