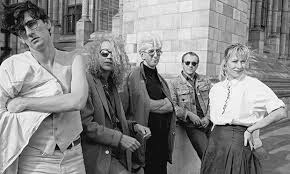 The Go-Betweens have been featuring recently on our small corner of the blogosphere to commemorate the 10th anniversary of the death of Grant McLennan.

I was only vaguely aware of them at the time when they first surfaced in the early 80's. It was only reading and listening to them on other blogs who held them in  great affection that brought them to the forefront of my attention.

As you do I thought a Best Of was the place to start and acquired Bellavista Terrace: Best of the Go-Betweens.
A Best of as opposed to a Greatest Hits, because as Robert Foster pointed out in the sleevenotes they didn't have any.
Between that and Grant's early passing there is clearly no justice in this world.


The Go-Betweens - Was There Anything I Could Do?

The Go-Betweens - Cattle and Cane
Posted by Charity Chic at 08:00