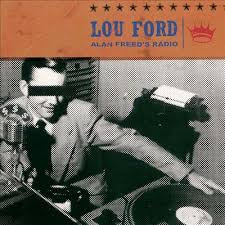 An excellent slice of Americana today courtesy of Lou Ford from their 2000 album Alan Freed's Radio.
Purchased  for next to nothing around the same time as it's 1999 predecessor Sad, But Familiar when I was going through a short phase of bidding for music on e-Bay.

Filed under L as in this instance Lou Ford are a band as opposed to a person. Named after a character in Jim Thompson's 1952 novel A Killer Inside Me. Apparently, as I have never read or indeed heard of the book, he was someone comprised of various levels, where what you saw on the surface wasn't really the whole story. You can see how that would appeal to a band when choosing a moniker.
The main men are brothers Alan and Chad Edwards joined by the rhythm section of John Morris and Darrell Ussery with Mark Lynch on bass.

A gentle song to start with and then the more thrashy (for Americana) song Replacement which almost sounds like The Replacements are performing it.

Alan Freed was an American disc jokey celebrated as one of the pioneers of playing rock'n'roll until he got caught up in a payolla scandal.