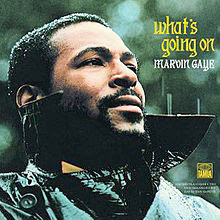 Marvin Gaye was lined up last week to follow Kim Weston but graciously stood aside for Prince
Playing Kim got me thinking that Marvin has never featured here with the exception of their hit duo It Takes Two.

Apart from the occasional song on compilations the only album I have of his is the 1971 masterpiece What's Going On.
A concept album written from the perspective of a Vietnam veteran returning home and witnessing a world of hatred, suffering and injustice.
It is one of those albums that is probably best listened to all the way through but I may be testing your patience and staying power by playing all 35 minutes 38 seconds
Rather I will feature two songs you will all be familiar with the latter subsequently being covered by Robert Palmer

Now I know I have Sexual Healing out there somewhere ......

Mercy Mercy Me (The Ecology)
Posted by Charity Chic at 08:00