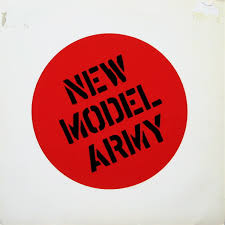 Jamie enjoyed the picture of the badge with The Cramps logo so I thought I would follow it up with another logo this time that of uber crusties New Model Army.
Founded in Bradford in 1980 and still going strong with front man Justin Sullivan an ever present.
It seems that they have a fairly fanatical following. Indeed George the Peanut Farmer knew a postie in Newcastle Upon Tyne who had seen them over 70 times.
I suspect that he would have been familiar with these two songs from 1986 and 1987 when they were at the height of their popularity.
Taken from History - the Singles 85-91
I'm not sure whether they have really stood the test of time