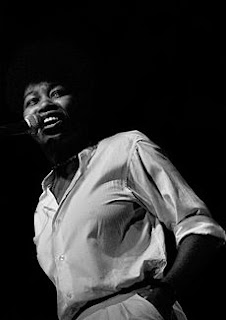 Like most of you, I suspect, I am most familiar with Joan Armatrading via her singles from the early 80's - All the Way from America, I'm Lucky, Drop the Pilot , etc. Some pretty good  poppy stuff.

I picked up The Collection in Whithorn recently which features her stuff from the mid 70's up until she became a household name
It does contain a few like All the Way From America, Willow and Love and Affection which I recognize.
However, I was presently surprised as to the broader range of some of the others  I was unaware of which have more of a blues and soul feel to them.
Here are a couple of examples

Joan Armatrading - Turn Out the Light
Posted by Charity Chic at 08:00