Bah Humbug, No That's Too Strong 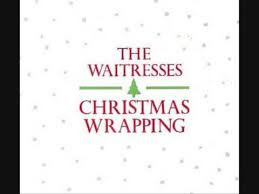 If you thought that purchasing Mojo's Festive 15 in October represented  forward planning how's about picking up Christmas Wrapping by The Waitresses in a bargain bin in February with the sole intention of saving it for this week?

On the Ze label it was released in 1981 but first charted in the UK singles charts for 4 weeks in 1982 peaking at number 45.
I must admit that I thought it had much more chart success given the fact that it features fairly consistently on the radio at this time of year.

Sign up to Ze records newsletter here and get a free download of their Christmas album whilst stocks last
Posted by Charity Chic at 08:00