Too Many Songs About Love and Not Enough About Whaling 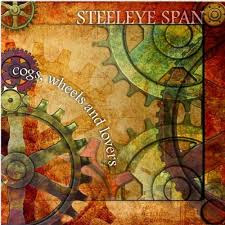 So said Mike Harding of the new acoustic and folk scenes.
Stuart Maconie in his excellent book - The People's Songs - the Story of Modern Britain in 50 Records affectionately describes folk music as containing a surprising number of tales concerning people being murdered down by the river,having their maidenhood taken by inconstant lovers and unfaithful knights, going on whaling expeditions,seeing sudden apparitions of drowned lovers, being robbed by good-time girls in the middle of the night, and prospecting for gold.

You will be delighted to note that all of the above feature in the music of Steeleye Span. You will also be happy to hear that gritty ballads of industrial labour, sea shanties and work songs appear on their 21st album from 2009 Cogs, Wheels and Lovers.
Featuring the dulcet tones of Maddy Prior

Steeleye Span - The Machiner's Song
Posted by Charity Chic at 08:00