The Broken Down Comforter Collection 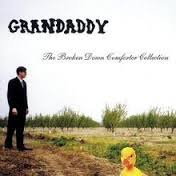 The Broken Down Comforter Collection by Grandaddy is a 1999 CD containing tracks from the mini album A Pretty Mess by this One Band and the EP Machines Are Not She
Described pretty accurateley by the NME as patchy but with gems hidden on here iridescent enough to render the collection essential.

It has lain gathering dust on the Americana shelves for a good few years until Drew's recent posting of one of their songs had me dusting it down and giving it a spin.
From these two gems perhaps it should be refiled in the Indie section in closer proximity to The Flaming Lips and Mercury Rev

Grandaddy - For The Dishwasher
Posted by Charity Chic at 08:00