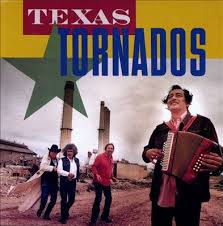 The Texas Tornados have appeared briefly before on CCM in the dim and distant past as part of the Mexican Monday series.
It is about time they appeared again.
I could wax lyrical about them but I think that listing the band members should suffice - legends one and all

Oh, and in answer to Swiss Adam's query I managed to squeeze twelve Monday's out the series plus a New Mexican Monday.

Texas Tornados - Who Were You Thinkin' Of

Texas Tornados - (Is Anyone Going To) San Antone
Posted by Charity Chic at 08:00