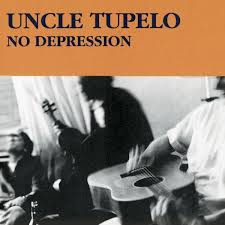 Mrs CC and I have often commented as to how good it would be if I stumbled upon a charity shop where someone had just handed in a slab of Americana.
Well it finally happened a couple of weeks ago when we walked into the Marie Curie shop in the South West Scottish town of Stranraer.
Some kind soul had handed in a dozen or so Americana CDs. I knew I had a few of them but left with 8 which I knew I didn't have or thought I didn't have. Turned out I didn't have any of them. Even better they were only 75p per pop.
I was as happy as a seagull with a stolen chip.
We start with the band and album which started a movement No Depression the first studio album from Uncle Tupelo from 1990 on the Rockware Records label.
I couldn't believe I didn't have it but suspect it may be because I have a good few of the songs on 89/93: An Anthology.
A first outing for Jeff Tweedy and Jay Farrar as well as Mike Heidorn on drums.
Terrific stuff