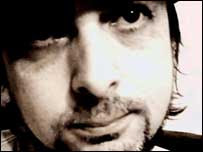 No, not that one!
Mrs CC put on a random CD the other day."Who is that?" I cried."Call yourself a muso" she replied."Give us a clue" I responded.
Several clues later including the initials TP and I was none the wiser.
Turns out it was Tim Prince  with the 2007 album Angel Songs on Lost Cat Records.
I've no recollection of how this came to adorn the shelves. It may have been an on spec purchase from the Fisherman's Mission in Mallaig. Or then again maybe not.

It appears from the very limited information that I can find that he is from Royal Leamington Spa but after some fairly extensive travelling he wound up recording this album in Athens, Georgia.His band may or may not be called Hazy Ray.

Nothing startling but pleasant enough. His voice reminds me a wee bit of Neal Casal.

Tim Prince - The Father Song
Posted by Charity Chic at 08:00