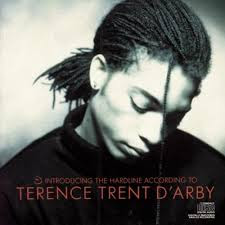 In 1987 along with a  few million or so other people I bought Introducing the Hardline According to Terence Trent D'Arby an album he modestly proclaimed as the most important album since Sgt Pepper.
Like a  few million or so others I never got round  to buying anything else by him and indeed had not heard anything until Scott on Spools Paradise thankfully back with us featured a couple of songs from the Neither Fish nor Flesh follow up album which I had mistakenly thought was called Neither Fish nor Foul.
These tracks were rather good but I have still to carry out my comment about following it up.

Terence is now known as Sananda Maitreya a name that came to him in a series of dreams and he is now produced around a dozen albums under these two names.

Terence Trent D'Arby -As Yet Untitled
Posted by Charity Chic at 08:00