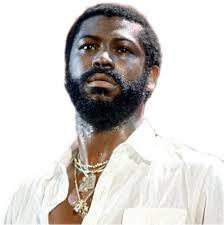 Some funky Philly Soul for you today courtesy of the late great Teddy Pendergrass.

A recent Stranraer two albums on the one CD purchase - 1978's Life is a Song Worth Singing and 1980's TP for the grand total of 75 pence. 37.5 pence per album -a total steal.
Some great stuff from the former lead  singer with Harold Melvin and the Bluenotes
Sadly he was badly injured in a car accident in 1982 resulting in him being paralyzed from the chest down.
Fortunately he was later able to continue his musical career prior to succumbing to respiratory failure in 2010 at the age of 59

More Soul next Sunday but in the meantime Get Up, Get Down, Get Funky, Get Loose

Teddy Pendergrass - Life is a Song Worth Singing

Teddy Pendergrass - Get Up, Get Down, Get Funky, Get Loose
Posted by Charity Chic at 08:00