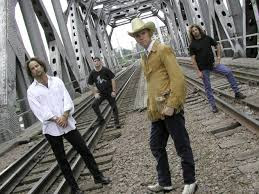 I was playing Viva Americana a terrific compilation the other day when I had the urge to share some Jason and the Scorchers with you. So here is One Last Question.
The only other Scorchers stuff I have is a live version of Absolutely Sweet Marie which I have previously posted and a burn of the album Halcyon Times so you will have to make do with Sid Griffin for track number two.
More Scorchers music is clearly required.

I have a couple of Jason Ringenberg's solo albums but that's for another day.

Jason and the Scorchers - One Last Question