The White Room of Confusion 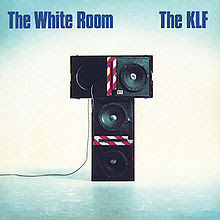 I've just searched and re-searched the blog archives and apparently I have never featured anything by The KLF let alone their 1991 seminal album The White Room. I'm not having that.

The only explanation I can offer is that I've tried before but gave up as the track list on the CD seems to different to what is coming out the speakers. It is the KLF after all. I remember being somewhat confused at the time of purchase.
The internet was not around then to offer an explanation which is namely The UK CD release (JAMS CD006)'s sleeve lists it as a 9-track CD, however the disc only has 8 tracks. Track 4 "Church of the KLF" is on the end of the track 3, moving all other tracks up a number. The sleeve also states the album is 45:05 long but in fact it is only 43:43 long. Wish I'd known that back then.

I think I've got it sorted but if not please bear with me.
Mad as a box of frogs - but in a good way

The KLF - Last Train to Transcentral

The KLF - Justified and Ancient
Posted by Charity Chic at 08:00