50 Americana Albums You Should Hear Before You Die - Anodyne 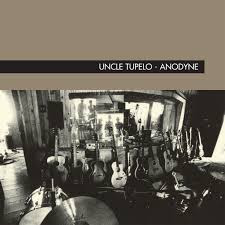 It probably won't come as a surprise to anyone that an album by Uncle Tupelo is featuring in this series although I'm sure that some would have thought that it would be their 1990 debut No Depression that would appear here.
Rather I've gone for their 4th and final album Anodyne from 1993 and released on the Sire label.
Before anyone gets sniffy about me featuring their only one released on a major label I should point out it was recorded from May to June in 1993 at Cedar Creek studio in Austin. The album was recorded live in the studio and each song was recorded in one take.

It was the first Uncle Tupelo album I bought so therefore it is probably the one I have listened to most.It was only relatively recently that I got round to picking up No Depression having previously had a few on the songs from it on an anthology.
The New York Times states that the album is certainly derivative (citing Neil Young and Little Feat) but the band isn't seeking to reinvent its source ,merely to honour them.
As I said yesterday about The Cramps - that's good enough for me.

Jay Farrar wrote six of the songs and Jeff Tweedy five with Doug Sahm providing lead vocals to the only cover which is his song Give Back the Key to My Heart
Within 6 months of the ablum's release Uncle Tupelo were no more. Following an acrimonious break up Tweedy went on to form Wilco with Farrar forming Son Volt.
Who knows if one or  other or maybe both will feature later in this series.