50 Americana Albums You Should Hear Before You Die - Soul Journey 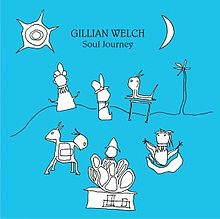 Gillian  Welch's music is a bit sparse and intense and is not for everyone. It is, however, right up my street.
She is hardly the most prolific of artists  releasing only 5 albums from 1996 to 2011 all in the company of trusted lieutenant Dave Rawlings. She has also peformed and recorded as part of Dave Rawlings Machine.
I saw the two of them perform together at a sold out Glasgow Barrowlands and you could have heard a pin drop.
It was a tough call as to which album to feature - Revival (1996), Hell Among the Yearlings (1998), Time (The Relevator)(2001) and The Harrow & the Harvest (2011) were all in contention.
In the end I went for Soul Journey from 2003.
As well as their traditional acoustic guitar and banjo , electric guitar, drums and organ also sneak in but this does not detract from her strong American roots influence. The album is on the Acony label and is produced by Dave Rawlings.

The good news is that  more recently in 2016 Boots No 1: The Official Revival Bootleg was released with All the Good Times Are Past & Gone  an album of acoustic covers recordedat home on a reel to reel is scheduled for release on or around now.
So hopefully she has her mojo back and we will see her back in the studio sometime soon.

Gillian Welch - No One Knows My Name