The Return of Rockabilly Clash 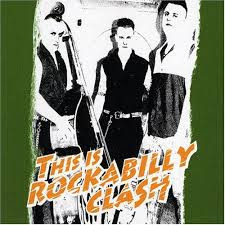 The long awaited return of This is Rockabilly Clash a compilation put together by Raucous Records in 2002 or 2003 depending on which source  you read.
An album that was well received last time it was featured. Why even George liked it. It was certainly far better than the Ramones one I also subjected you to around then.
It was a couple of covers on songs from London Calling last time around so let's go back to the debut album for today's offerings.

First up are The Farrell Brothers from Selkirk. That's Selkirk in Manitoba, Canada as opposed to the Scottish Borders. There are probably few Career Opportunities in either place.
Where were XX Cortez when my Double Initials series was on the go?
I can't find any information on them sorry although they have a couple of songs on You Tube but not I'm So Bored with the USA as far as I can see
We are dipping into the 1979 US version of the album for the final track Jail Guitar Doors which is taken on by Southsea The Caravans

XX Cortex - I'm So Bored with the USA