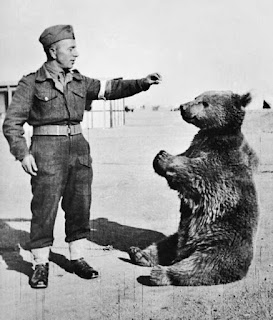 Wojtek the Bear was a bear who was adopted by the Polish army  and who was subsequently enlisted and promoted to a colonel.
It is a fascinating story which can be read here.
Wojtek lived out his later days in Edinburgh Zoo prior to shuffling off to bear heaven in 1963 at the age of 21.
The fact that he ended up in Scotland and entered Scottish folk lore may go a way to explaining why  four young men from the West of Scotland decided to christen their indie pop band Wotjtek the Bear.

They released their debut album A Talent For Being Unreasonable on the excellent Scottish Fiction label in May 2018 and it is well worth checking out
The price is certainly not unreasonable.

You know what to do. In the meantime here is Postcode to whet your appetite.