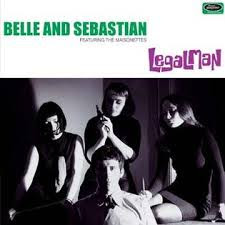 In between Christmas and New Year I had my last charity shop visit of the year.
I went to Clarkston Toll on Glasgow's South Side where there are a number of charity shops one of which is Oxfam.
It was tough but I resisted the temptation to buy a Huey Lewis and the News album for £5.99 or a Fall album for £100 (no, I haven't  missed out a decimal point).

I was however happy to fork out 50p for Legal Man a Belle and Sebastian single on Jeepster Records from May 2000.
It's nothing special although it apparantly reached as high as number 15 in the UK singles charts.
The title song features The Maisonettes.
Thankfully the second song on the single Judy is a Dick Slap is an instrumental,the first one they released
The final song Winter Wooskie is the last one to feature bass player Stuart David.

That is probably more information than you need

Belle and Sebastian - Judy is a Dick Slap