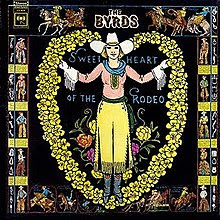 From a relatively obscure choice last week to one this week which is probably responsibe for starting the whole genre or sub genre. Also one which would almost certainly find a place in my all time top ten.


From 1968 Sweetheart of the Rodeo was the sixth album by The Byrds. Crucially it is the only one of their albums where Gram Parsons was part of the band. Or was he? Chris Hillman is adamant that he was only a salaried sideman as that was the only way that they could get him to turn up.
Nevertheless he is credited on the album as being a member alongside Hillman, Roger McGuinn and drummer Kevin Kelly.
It is no coincidence that the two tracks I have chosen to share today feature him on lead vocals.
You're Still on My Mind is one of the songs that I want played at my funeral, and Hickory Wind is just sublime.


Wiki states that  The Byrds' move away from rock and pop towards country music elicited a great deal of resistance and hostility from the ultra-conservative Nashville country music establishment who viewed the Byrds as a group of long-haired hippies attempting to subvert country music.
I would argue that they actually enhanced country music as opposed to subverting it and gave it the kick up the arse it so desperately needed.


Without this there may not have been many, if any, albums on the Americana shelves so I for one owe them a debt of gratitude. And if you have got this far so should you.


I have The Definitive Collection which contains 25 tracks by the band.Somewhat criminally only one track from this album, You Ain't Going Nowhere. There are not 24 Byrds songs better than the other 10 on Sweetheart. I, obviously, would argue that there are none!


I'm not sure (i.e can't be bothered looking out the list) who is featuring next week but they have a pretty tough act to follow

The Byrds - You're Still On My Mind