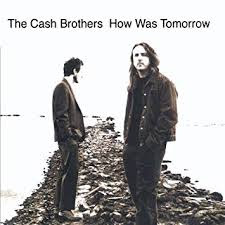 The act with the unenviable task of following Sweetheart of the Rodeo are The Cash Brothers with their  2001 album How Was Tomorrow on the Zoe/Rounder label.
No relation to the great man and not even The Bastard Sons of Johnny Cash.
Rather they are the  brothers Andrew and Peter Cash from Toronto, Ontario.
How Was Tomorrow is effectively an update and re-release of their 1999 debut album Raceway and follows on from 2000's Phonebooth Tornado


I'm pretty sure that I saw  then around that time but the  late 90's/early 00's are rapidly becoming a bit of a blur.Bad news given that the majority of the albums in this series are from around then.


Nebraska is, for me, the pick of the songs and one that I offered up as a contribution to George's State of the Union  series (stay tuned  for news on the George front).Any song that pays homage to the Boss' finest 40 minutes 50 seconds is fine by me.
The opening number Raceway is none too shabby either.


Followed up by A Brand New Night in 2003 and Skydiggers/Cash Brothers in 2006 and nothing since.
The last one was following a series of collaborative shows played by the two bands, Peter Cash having been a member of both with Andrew being a frequent collaborator.


Andrew Cash released a number of solo albums and  was  a New Democratic Party MP in  the Canadian Parliament from 2011-2015.