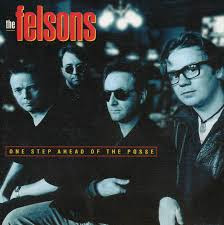 This is one that I suspect very few of you will be familiar with.
The Felsons were a band from the Americana hotspot that is Livingston, West Lothian, sunny Scotland.
They started off in the mid 90's and are probably the band that I have seen most times live (either them or the Radio Sweethearts) as they seemed to support virtually every act I saw during that period.


They were led by Dean Owens who went on to enjoy a solo career and is still going strong. Deano was accompanied by Kevin Maguire on bass,  Colin Macfarlane then Calais Brown on guitar and Keith Burns on drums.
They only ever released three records - their debut One Step Ahead of the Posse, Lasso the Moon a mini-album from 1997 and Glad from 1999.


Allmusic descibes One Step Ahead of the Posse as an enjoyable, straightforward country outing that ably reprised the duo’s live shows.
There are probably better albums and acts on the shelves which could have featured rather than this in the series but this one means a lot to me personally and it is one  that I look back on with fondness.
Glad is a bit more poppy. Lasso the Moon is not dissimilar to One Step but being a mini-album it is precluded from this series.


It reminds me of a night when I was watching them at King Tuts and the guy standing next to me asked what I thought of them. "Very good " I replied, which was just as well as he then informed me that he was Dean Owens' dad.


We are back on more familiar territory next week

The Felsons - I Ain't Been Anywhere Yet

The Felsons -Shine Like The Road After The Rain
Posted by Charity Chic at 08:00