Yesterday is No Tomorrow 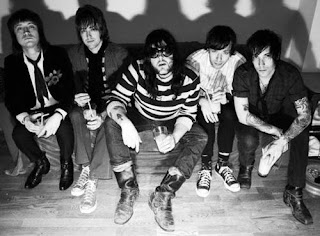 If drinking, fighting and good old-fashioned rock'n'roll are your mantra Brooklyn punks Stalkers are about to change your world.

All the above is blurb on a CD promo single I picked up somewhere along the way and which was mis-filed next to Tuesday's Mo Solid Gold
I haven't been able to find out that much about them. Yesterday is No Tomorrow was an album on One Little Indian released in 2004. They were signed  to the label on the recommendation of Jesse Malin.
The release of the single in 2007 seems to coincide with a tour of Britain where they played at Leeds and Reading.
The second song is by the Rolling Stones and was on their Aftermath album. It has also been covered by The Searchers and The Kynd
That's it.

Stalkers - Yesterday is No Tomorrow

Stalkers - Take It Or Leave It
Posted by Charity Chic at 08:00