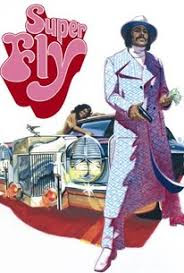 Another contribution to my occasional and accidental series Soundtracks of Films I've Never Seen.
Form 1972 Superfly was a blaxploitation crime drama starring Ron O'Neal as the fantastically named Youngblood  Priest  a pimp and drug dealer trying to quit the underworld drug business.
No wonder the National Association for the Advancement of Colored People (NAACP) were unimpressed.

It crossed my radar recently as it is fairly extensively referenced in Stuart Cosgrove's Harlem 69 The Future of Soul book.
The film was almost exclusively shot in Harlem and Cosgrove points out that the lead appears to be based on a high profile Harlem dealer William Terrell known as Goldfinger.

More importantly and probably more famously the music is by the mighty Curtis Mayfield in one of his early solo projects following his departure from The Impressions
Largely on the back of the success of Freddie's Dead the album was one of the few soundtracks to out gross the film it accompanied.