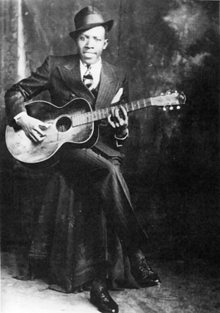 Long suffering readers will be aware that between Christmas 2013 and January 2014 I picked up 39 CDs from the Blues Collection in my local Charity Shop
The Blues Collection was a magazine that was produced between 1993 and 1997 with a CD provided with each of the 90 editions.(there are actually 93 in the series)

Ever since I have been scouring charity shops to add to the collection and have even taken the trouble to note down the numbers of those I don't have and keep it in my wallet following the purchase of a couple of doublers.
On Saturday in a charity shop in Troon I reached a milestone with the purchase of number 6 in the series. Red Hot Blues by Robert Johnson taking my total to 50.
It matters not that I already had most, if not all, of the tracks on Cross Road Blues as it is another towards the total.
The man who allegedly sold his soul to the Devil at a Mississippi crossroads to achieve success.
He died aged just 27 in 1938 but not before two famous recording sessions.
These two are taken from the recording sessions from 23rd  to 27th November 1936 in room 414 of the Gunter Hotel in San Antonio
The other sessions were held in the Vitograph buildin in Dallas between 19th and 20th June 1937.

He only ever recorded 29 songs but his legend endures

Robert Johnson - Ramblin' on my Mind