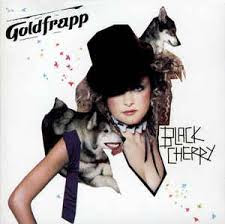 An interesting and welcome by-product of my current Double Initial series is that it has you forensically scouring the shelves of the various genres for the initial concerned,
Next up in the series is G hence the prompt for Goldfapp featuring today.
Regular visitors to these pages will note that there is not very much electronica featured. That is because I am not particularly a fan, I do however like me a bit of Goldfrapp with their first 5 albums having been acquired mainly from charity shops over the years.
I would describe then as electronica lite.

Their second album from 2003 Black Cherry is described as having a glam rock feel to it with Baccara being cited as an inspiration. What's not to love about that?
Clearly something if you are an Austrian given it is the only one of their albums not to chart there