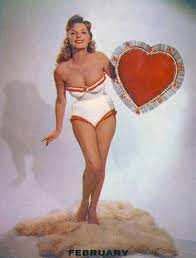 It's the first of the month again so it is time for the February number on Julie London's Calendar Girl album.Wonder wht the big heart is for.
We are a third of the way there already George.
February Brings the Rain sings Julie. I'll settle for that given that we have had a bit of snow during the week. Plus it is really good to finally see the back of January.

I don't have much intel on this one I'm afraid other than it was written by Bobby Troup and it was recorded with The Pete King Orchestra in 1956.
It was also the  b-side of the wonderful Cry Me a River.
That's us until next month.