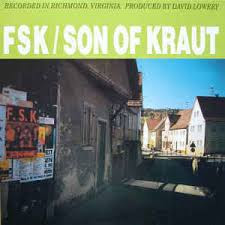 Featuring Freddy Fender on Saturday's Double Initial series had me reaching for the only record I have ever bought in Belgium.
Said album is Son of Kraut by Peel favourite's F.S.K.
As Walter and Dirk will be aware F.S.K. is an abbreviation for Freiwillige Selbstkontrolle which is German for voluntary self control.
They can fairly accurately be described as a German Mekons

The blurb in the inner sleeve describes Freddy Fender's Sohn  as Roman Catholicism and Latin Drugs in stereo. Glad we cleared that up.
Germany famously demolished a wall. America is trying to build one.

Finally, as I'm sure you are all well aware When in rains in Texas it snows on the Rhine