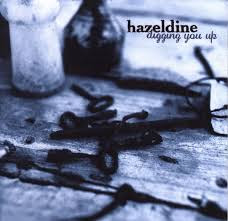 This week I have been mostly listening to music by Albuquerque  Gothic Americana band Hazeldine.


I started with their 1997 debut album How Bees Fly which is on the great German Glitterhouse label. I was listening to this with a view to posting but a quick check confirmed that it had already featured.

This led to my digging out Digging You Up (see what I did there?) their second album from 1998 on Polydor.
This has not featured before which I found strange considering I have had it considerably longer that How Bees Fly. Then I realised that Bees was one of the great Stanraer Americana Haul (8 in total)  from late 2015 and suddenly it all made sense.

So Digging You Up it is.

There are 4 songs which feature on both albums presumably because of their close proximity and the change of label. Easier to dig out some of the old stuff given that short period of time.

The first song appears on both and is for Spence. He'll hopefully know why
The second as far as I am aware is exclusive to Digging You Up.
There is also a good cover of Summer Wine which I will save for another day.

Hazeldine -Right To Feel
Posted by Charity Chic at 08:00