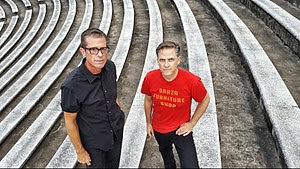 I was a fan of the early work of Tuscon desert noir band Calexico,  a band not afraid to throw a bit of  mariachi and conjunto into the mix.
They were founded and are fronted by Joey Burns and Jon Convertino  the erstwhile rhythm section of Giant Sand.
I followed them fairly faithfully until their brilliant 5th album from 2003 Feast of Wire and then we gradually drifted apart.
I was pretty disappointed when I saw them live at the Glasgow Academy which may have contributed to the parting of the ways although it wasn't  really a conscious decision. I just moved on to other things.