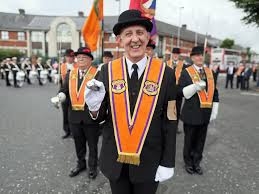 Fortunately those of you who are not from Scotland will probably have no idea what I am on  banging on about  today.
I'm talking about the scourge of sectarianism  which once more has raised it's ugly head.
While undoubtedly a societal problem which is prevalent in the West of Scotland  it  manifests itself  most often among the fans of the two main Glasgow football teams Celtic and Rangers.

In the last week Kilmarnock footballer Kris Boyd (a Protestant) has been subjected to sectarian abuse from Celtic supports and then Killie manager Steve Clarke ( a Catholic) was the butt of sectarian abuse from Rangers fans.
He had the courage to speak out about it and rightly pointed out that it belongs to the Dark Ages
Sadly Kris Boyd felt it was water of a duck's back given that it happens so often.

There has been the usual handwringing, buck passing and whataboutery. A lot of talking and very little action.
The harsh truth is that both of the Old Firm may deliver platitudes but they have a vested interest in ensuring that it continues as it represents a significant cash cow for both of them.Those of you who think that the Scottish Football Association will do anything like levy fines or dock points are living in cloud cuckoo land.

The vast majority of folk go around their business without getting involved in this nonsense. Sadly the knuckle draggers are not going away any time soon.

Ballboy - The Sash My Father Wore
Posted by Charity Chic at 08:00