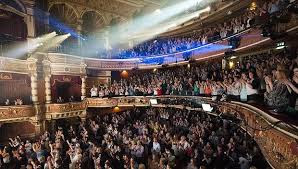 A lack of time and a degree of lethargy means I have left it pretty late to feedback on the three recent gigs I attended.
So somewhat belatedly and briefly here goes. Better late than never I suppose


25th January - Poetry Club SW3 - Sister John Album launch  (8.5/10)
A new venue for me and a bit hot and claustraphobic but that didn't detract from a great evening.
First up was the poet Stephen Watt - well it was Burns Night after all.Some good stuff
He was followed by Wojtek the Bear. I was pretty excited about this as I had just got their album A Talent for Being Unreasonable. They were excellent. Some great songs and really good jangly guitars.
The main act were of course Sister John lauching their eponymous second LP on the Last Night from Glasgow label More variety in the style of songs than Returned From Sea  and maybe slightly darker but all the better for it. I was particularly taken with  Lost and Won  and Love Me or Not
Some slight technical problems including a drum kit being repaired with gaffer tape didn't detract from an excellent set. Looking forward to seeing them again at Stereo on 16th March.


27th January - Karine Polwart and Kris Drever with the Scottish Chamber Orchestra - Kings Theatre (9/10)
I've already writen about the support act The Local Honeys. Karine and Kris were phenomenal with the orchestra behind them. At first I thought they might be drowned out but thankfully that wasn't the case. Highlights included Suitcase and Cassieopia from Karine's latest album Laws of Motion and Ghosts  and Steel and Stone by Kris.A lovely venue (but again very hot) with brilliant acoustics.


31st  January - Emily Smith and Jamie McClennan  - Mitchell Theatre (6/10)
The weakest link of the three. The support were Raices Aereas with some experimental Galician music which I would politely describe as interesting.
I know Emily Smith as a traditional Scottish folk singer. Here she was singing with her husband as a duo and rebranded as Smith and McClennan. Both Mrs CC and I felt that for us this didn't really work. It didn't pay justice to her wonderful voice. Thankfully there were a couple of examples as to what could have been. She has been performing for over 10 years and you can understand them exploring a new angle but it is not for me I'm afraid. We ended up purchasing Echoes one of her older albums rather than the new one which tells it's own story.

Emily Smith - While Roving on a Winter's Night

Funny how there is a lot less traffic when I forget the music. And here's me thinking you came here for my dazzling wit and repartee!