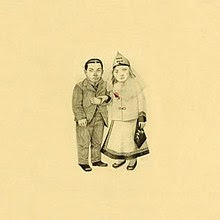 I picked by The Crane Wife a 2006 album by The Decemberists a couple of months ago and it seems too good an opportunity not to feature it today.
I wasn't particularly impressed first time round but it sounded slightly better second time around so maybe it is a grower.At the moment I remain to be convinced that it is a keeper.
The album was inspired by a Japanese folk tale. I'll let Wiki tell the story so I don't have to
Produced by the ubiquitous Tucker Martine

The Crane Wife 3 is the first track on the album with The Crane Wife 1& 2 being track 9. This annoys me far more than it ought to.

The Decemberists -The Crane Wife 3

The Decemberists - Sons & Daughters
Posted by Charity Chic at 08:00