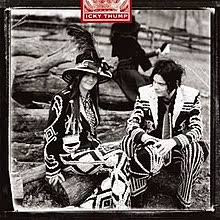 On Icky Thump the 6th and final  studio album by The White Stripes, they  mash up northern English vernacular with the title (meaning what the heck) and the cover where Jack and Meg appear as a Pearly king and queen part of the Cockney culture of London.
The music is also the usual mash of garage rock and scuzzy blues and whatever else takes Jack's  fancy in this case Scottish folk music,trumpets and bagpipes.
The theme according to Jack is about feeling positive about being alive, taking deep breaths and just being really happy and who are we to argue
It's hard to believe that this is now 10 years old and indeed that the first of their albums was released in 1999.
With this purchase that's me now got all 6 of their studio albums something that makes me rather happy. What can I say, I'm easily pleased.