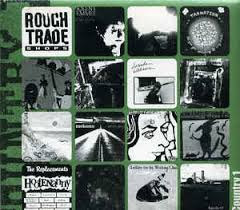 The other day when I featured the Violent Femmes I mentioned that I had first come across their song Country Death Song on the Rough Trade Country 1 compilation.
This naturally led to me dusting it down and giving it a listen.
My acquisition of Hallowed Ground means that I now have just under half the albums featured on the front cover (7 I think) and albums by 22 out of the 40  featured artists.
I short a snapshot of where my musical tastes were in the late 90's/early 00's.

I've featured many of the artists and a good few of the artists before but it is too rich a seam not go go back and mine again.
A further three for you today including a  quite wonderful cover by Freakwater of Dwight Yoakam's South of Cincinnati

Whiskeytown - Houses on the Hill

Green On Red - Hair of the Dog