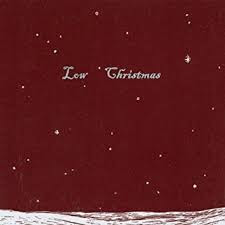 The 1999 EP Christmas by Low is a record that has appeared here on previous Christmases and one which my workmates have never forgiven me for putting on one year during Christmas nibbles  instead of Maria Carey. Some people just have no taste.

Given that it  has features before most of the excellent originals such as Just like Christmas and Blue
Christmas have graced these pages before I've decided to give you their take on two old favourites. They will both be familiar to you particularly Silent Night which has been recorded on at least 733 different occasions.
It has featured here before on four occasions by Al Green, Baby Washington. Richard Hawley and Lisi so only 728 to go.
Warning there may be up to a further 10 on the shelves!

Johnny Cash will return next Saturday