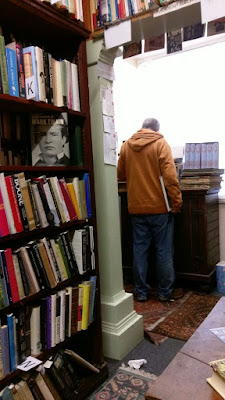 The  final installment of this short series sees your intrepid author clutching his records but staring longingly at The Whisky Distilleries of  the United Kingdom by Alfred Barnard which sadly at £40 was somewhat out of my price range.
The final album, the one in the middle  of the previous pictures which was puzzling The Swede , is Songs From a Room the 2nd studio album by Leonard Cohen from 1969.
Confession time - it was bought primarily because Bird on a Wire, which I wanted to feature in the Johnny Cash series, is somewhat strangely not included on the Best of Leonard Cohen which until now was the only one of his on the shelves.
Rather than paying 99p for a download I figured it was probably worth  forking out three quid more and coming away with this album.
It is ok but if I were to score the three albums which I acquired it would come a distant third.It shall now be filed away as will this mini series.

Leonard Cohen -The Partisan
Posted by Charity Chic at 08:00