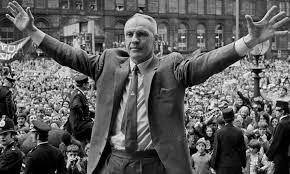 In the five and a bit years that CCM has been on the go I have never posted anything by The Smiths.
A couple of covers here and there but nothing by the  band.
It may well be because up until Saturday when I picked up The Queen is Dead I didn't have anything by them.
A statement which could well get me drummed out the  Brownies.
So not a huge fan as you can probably gather although the album is not bad at all.
From 1986 when Morrissey was slightly less of a right wing reactionary twat than he is now.

Time for a quote from the great man. No, not Morrissey but Bill Shankly

That's how you do it Moz

The Smiths - There is a Light That Never Goes Out