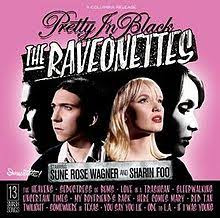 Now this is much more like it.
I was pleasantly surprised to stumble upon Pretty in Black the 2005 second album by the Danish dynamic duo The  Raveonettes  among the usual dross which makes up a charity shop CD selection.
I've opted for the two singles from the album Love in a Trashcan and  Ode to L.A.
If the vocalist on the latter sounds familiar that is because it is the legend that is Ronnie Spector. Moe Tucker of Velvet Underground fame is on drums and percussion.
Which goes to show that they are held in high regard by those that know.

There are a couple of interesting covers among the bonus tracks which I will get round to featuring in due course.

The Raveonettes - Love in a Trashcan