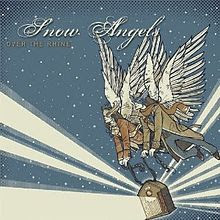 Snow Angels is a 2006 Christmas album (their second) from Ohio based Americana band Over The Rhine.
Initially released independently and then put out by the Great Speckled Dog label.
My copy is a download which I got free  from Noise Trade or some such place.

Over The Rhine -Little Town

Over The Rhine - One Olive Jingle