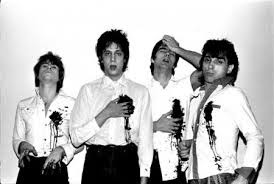 This week's Saturday Lucky Dip is a slice of New York Punk from a Mojo compilation from November 2005 which hijacks the world's most famous logo with I  ♥ NY Punk!
It contains a good few songs which haven't stood the test of time and some live songs which probably sounded great if you were in the audience in the late 70's but which sound pretty ropey now
There are a couple that stand outs -  the previously featured Rip Her to Shreds by Blondie and the still to feature New York Dolls.
I wasn't aware that Mink DeVille were considered punk given that my only exposure to them up to now was Spanish Stroll.However it appears that they were one of the original house bands at CBGBs from 1975 to 1977 so a punk pedigree then. She's So Tough is rather good. I should check out more by them.
There is no disputing that Johnny Thunders & the Heartbreakers were punk. Here is their extremely faithful cover of the Ramones classic Chinese Rocks (just realised I've posted this one before but well worth another listen)