Prima Ballerinas on a Spring Afternoon 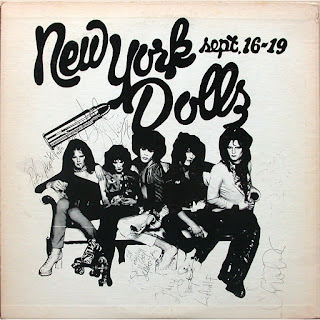 Who could fail to be impressed with a band whose members had such names as Johnny Thunders and Sylvian Sylvian. Add David Johansen, Arthur Kane Jr and Jerry Nolan to the mix and you have the classic New York Doll's early 70's line up.
A band who were glam rock in their clothes and hair but who produced a somewhat heavier sound with their music and attitude very much precursors to the burgeoning punk movement. Especially once Malcolm McLaren got involved as Svengali and manager.
It is easy to imagine members of Blondie, Talking Heads, the Ramones, B52s and countless other American bands listening to the Dolls in their bedrooms and this influencing their rehearsals in the garage the next day.
Hedonism has never sounded better.